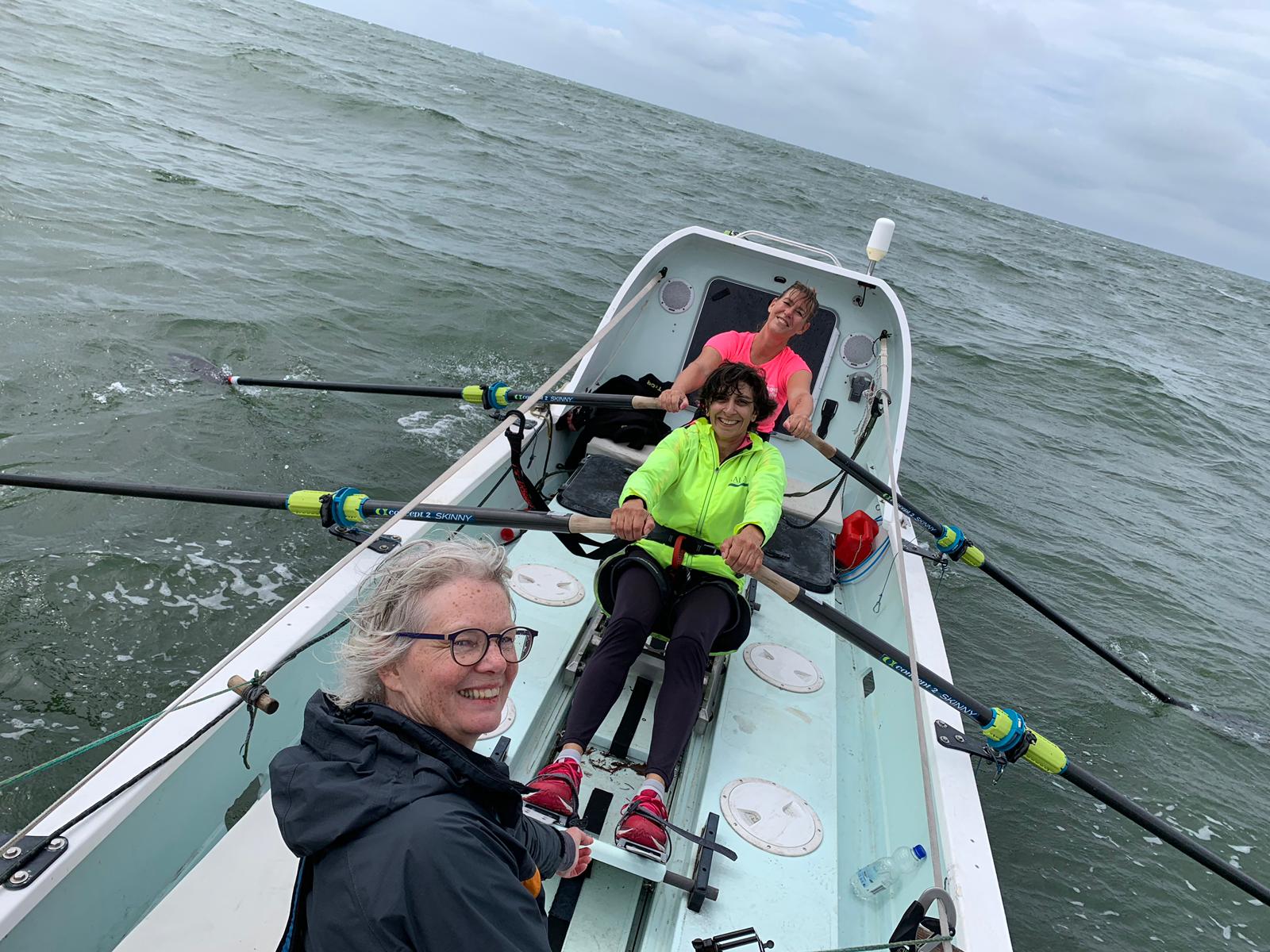 It was our first time to row in an ocean rowing boat which was pretty exciting. We were invited by Marcel from the Dutch Atlantic Four who won the 2018 Talisker Whisky Atlantic challenge. They had an ocean rowing boat to their disposal only for a week. We quickly got a date when Astrid, Remke and Bela could make it. Pity that Désirée couldn’t be part it but we kept het close to the action.

Friday 12th July we set off to IJmuiden and on our way, we got a call from Marcel that the weather may not be on our side. Once we got to Ijmuiden and met with Marcel we realized it may be a waiting game for the weather to improve. But first we took a look at the boat and stepped on board to get a feel.

Wow, there it was floating in the harbour, a small boat amongst big sail and speed boats. Exciting. It was as we imagined it to be, as pictures showed us before. But now its’ that much more tangible. This small kind of boat is something that will carry us across the ocean. It begins to sink in. It’s pretty small and lean – 8 meter by 1 meter with two small cabins either side. Remke and Astrid took a lie in one of the cabins together to get a feel for space. That was pretty tight but comfortable enough. Getting acquainted with such a boat really helped to get a feel for what our expedition vessel could be like. This boat was an older version Rannoch equipped with safety cables but not all the equipment we’d need to officially cross the Atlantic. We’ll now have to start orientating on what kind of boat we’d need.

The weather started to take a turn for the worse. The clouds where gathering above us and the wind picked up. We took cover in a beach cafe nearby. Over a cup of coffee we had great conversation with Marcel. We were able to ask so many questions to get more of a feel of what they as a team went through…the physical preparations their team made, their choice of boat, the challenges of sponsoring etc. The time flew by and 2 hours later the heavy rain had eased off and the clouds were starting to break. A quick check on ‘buienradar’ (rain forecast app) and we set off to the boat. This was it… our first time to actually row in such a boat. Thrilled by the opportunity.

Once at the boat we harnessed ourselves on the safety lines. Astrid and Remke took to their rowing seats and Marcel steered the boat out of the harbour. Still windy with a little rain but knowing it would get better. Off we went while I watched on board. Whooohoooo, what a feeling – unbelievable. Such an milestone. As we got out of the main harbour into the wider harbour opening the winds really hit. Remke and Astrid had to row against the wind. Big smiles on their faces and very comfortable behind the oars. Little instruction from Marcel and that was it… they were busy rowing for an three quarters of an hour before we switched over. I took Remke’s place and that was a question of unharnessing and harnessing so that you could easily cross each other. We got to our new positions and both felt a little sea sick, although we never really let it be known, we just got on with it. That is really something we need to get used to. No complaining and just getting on with the job at hand and keep rowing. That’s what we did. The further we went out of the harbour the bigger the waves. Big rolling waves. It was something like a rollercoaster. I was even lifted from my seat by the waves. Awesome feeling.

Rowing the waves was strange at first. There is no control when your oar will hit the wave. Sometimes you’d hit air as the wave would roll under the boat. It was something we’d very quickly got used to and is just a matter of feeling ‘as one’ with the ocean. Also the rowing technique was something to get used to. It’s a cross between sloep rowing (fixed seat rowing) and scull rowing.

By the time we got to the wide opening of the harbour and sea, the rain had stopped and the wind had eased a little. We turned back to row with the wind behind us back to the harbour. Remke switched places with Astrid and we made a new twosome. Astrid our trusted journalist kept our followers updated with a live broadcast via facebook. We really want to share the experience so that people around us get a feeling how it is to be on the boat. Our journey is your journey.

Safely back at the harbour, we got the boat tied to the jetty. A fulfilling day! Thanks to Marcel who was great coach. We couldn’t have done it without him and thanked him with Deventer beer and special cake. Satisfied and excited, we set off back home. Now the scene has been set, we cannot wait again to get back on such a rowing boat. The adventure has begun!