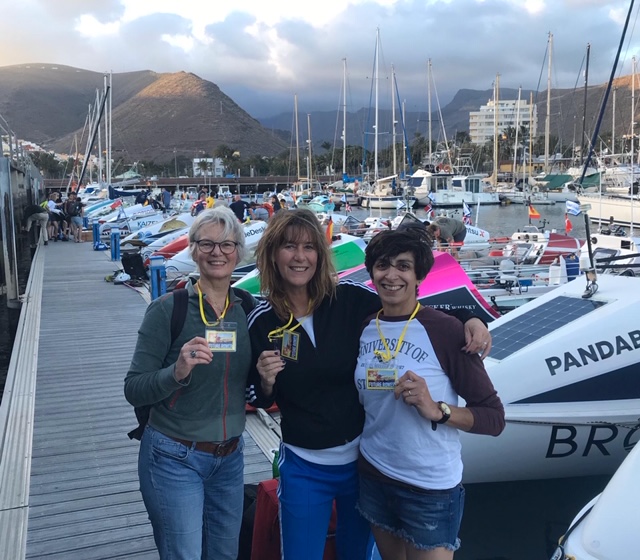 Visiting the start of the 2019 Talisker Whisky Atlantic Challenge in La Gomera was amazing and we learnt a lot. The warmth and wisdom of the teams, the colorful ocean rowboats, the emotions and excitement, …it brings it so much closer to home. Within a year from now it will be our turn – Dutchess of the Sea at the start line. 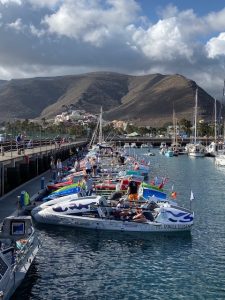 Astrid, Remke were there for a week and Bela for a few days. Privileged to have a ‘future rowers badge’ ensured we could get around the marina and reach out to this years team. We missed the presence of Desiree who was having a holiday in India. However she was there in spirit and we kept her fully abreast of the vibe down at the marina.

In the evenings, the place to be was The Blue Marlin, the hangout pub for the rowers, family and friends. It was a great international and friendly atmosphere with everybody mingling. You always tend to have that one beer too much on such nights, but the memories you get back for it are worth every sip.

We talked to different teams during the day at the marina, who were very enthusiastic to share how they prepared for the race. From training, to foods, to clothing, to technical equipment, to the different buckets needed for seasickness. The beauty of this race, it doesn’t matter if you are young or old, chubby or thin, or what nationality. It is evident that the drive and passion brings all these people together. It creates a beautiful buzz. In this year’s race there are 35 boats taking part from solo’s to teams of 2,3,4 and 5. Twelve nations are represented with a total amount of 103 participants. Next year there is already a waiting list. The popularity of the race is growing fast.

One afternoon, we had a ‘Future Rowers’ briefing by Ian Couch the Security Officer. He emphasized that the success of the race is as good as how well you prepare. The talk was good and open. It brought it home how real this is, that once at sea….it’s about getting across no matter what.

The different types of boats were interesting to see – some were more colorfully wrapped than others, some newer than others. It was clear that Rannoch is the leading supplier of ocean rowing boats but it was also good to see the upcoming newer models made by Mark Slats from aluminium. Mark is the record holder for the fastest solo crossing which he raced back in 2015. It was also good to see and meet the Dutch Atlantic Four team, who were the winners last year. We learnt a lot form them too. Astrid took them up on their offer of going out to sea on a boat, and guess what, they had the luck of seeing and swimming between the pilot dolphins. What an experience! 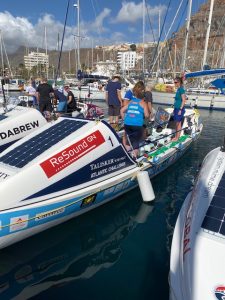 While in La Gomera we were particularly attached to the team Oarsome Foursome (now 3 ladies) whose boat ‘Liberty,’ (a Rannoch 45) we are buying. Just before the start, the contracts were signed and an hour later we were waving them goodbye for their crossing. Oarsome Foursome are a lovely down to earth team. Two of the team members are a ‘mother and daughter ‘combi, and the mother is deaf. It is inspiring to see that they will be taking on this challenge no matter what. Go Ladies!

12th December was start day. You could feel the slight nerves and eagerness of each team to get started in the run up to this day. They have waited so long for this moment, and now the time has come. No more delays please. The teams had regular briefings and towards the start day it was clear that they could depart as scheduled. What a relief. 10.30 local time the first boat left the harbour…. into the big wide ocean. Hundreds of people were swelling around the marina. It was an amazing atmosphere. Every five minutes the next one left. Three hours later the Marina felt empty. Weird. However the excitement continues. We are following the race on the YB Races app. Highly addictive, and it seems the first few days were really tough. We will be cheering on the teams during their epic adventure. Respect!

We want to thank the organization, teams and the past rowers we met for their time and all the insights. Really inspiring and we are all fired up to take on the 2020 TWAC Challenge. Till next year in La Gomera!