It was April and I had to make the hardest decision of my life given that the race starts in December. I would undergo a hernia operation and was at the same time pretty relieved that it had to happen now and not later. Already for some time I had a hernia (hernia iguinalis is the official name or ‘liesbreuk’ in Dutch), but the harder I trained the more I started to feel the pain and the bigger the lump. I knew this was going to be a critical decision but the sooner I would be treated the sooner I can recover (or at least that is what I hoped for). It was middle of Corona time and no patients were being operated on, but after having called the doctor, she escalated this to the Surgeon and within three days I was in the hospital and on the operation table. All went well and the Surgeon confirmed it was a substantial break that I had. I am glad I did not continue in the way I had. But the hardest part was to come, i.e. take it easy and recover. In fact one of the hardest things I had to do. My mind was fit but my body needed to recover.

At the same time all this was going on, we were trying to get Liberty (our boat) to the Netherlands. I was arranging this with the parties in the UK and when I came out of the operating theatre we got the news that Liberty was ready to be transported. A big relief there too.

Over time, slowly and surely I was making gradual progress, but with one set back after 8 weeks. A physio exercise did not take well to the wound. I had pain that did not quickly subside. I was literally crying (not from the pain), but just thinking that by 8 weeks things would have improved, but now I felt I was back to square one. I swallowed hard. It was already mid-June. At night I would be thinking ‘what if I can’t take part’ that would be awful. I so want to do this and want to do this with the team. I could not afford to let the team or myself down. Not at this critical moment. At times in bed I would shed a few tears while at the same time holding onto faith – not knowing how it will materialize.  I had to take one day at a time and not rush things as that would also jeaopardize things. It was so hard to accept but over the last few weeks I have learnt to listen and trust my body. The good thing was despite the set-back, I could at least be the helm lady for the team. We got to know Liberty more and more and we operated as a team. 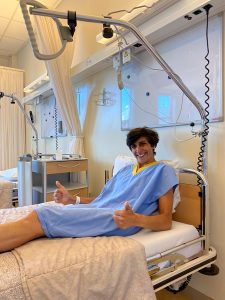 By July it was coming to three months since the operation and my old physio got me back on track. After a few session I was discharged and could start building up my sports in a very gradual way. First in the gym and then my first go behind the oars with Liberty in the latter part of July – first 5 minutes then 3x 5 minutes, then 10, then 20, then 30. It was my aim to row at least 1 hour by Aug 1st when we would be in Den Oever. And guess what happened. I rowed an hour with Liberty on Aug 1st on the Ijsselmeer. Yes! I was ecstatic with a big smile from ear to ear. I could not tell you how happy I was. But the road is still a long way to go. At that point I had only 4 months to go and only 3 months before Liberty would be shipped to the UK. I needed to build up the momentum gradually. From 1 hour ….to 12 hours a day 50 days long. That is quite something. Its now end of August and I see some great progress, now rowing 10-12 hours over 2 days. Not always ‘pain free’ especially when rowing against the hard wind but the it’s a matter of getting through it.  Meanwhile a sports doctor, a manual therapist and a sports coach help in my full recovery. The next three months will be important. But for the first time in months I really feel on track and will get there, no doubt.

I feel grateful to where I have come from. When the mountain ahead of you looks huge and you have to get over it, trust me it takes patience and faith to get to where you want to get to (despite the tears).